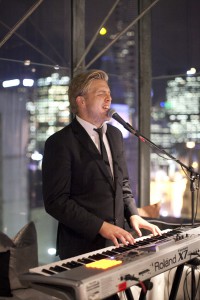 Garth Ploog is a Musician, Singer, Songwriter, Actor and TV Presenter from Melbourne, Australia. He has performed extensively over the past 10 years in both original and corporate bands and is one of the most sought after entertainers in Melbourne. He has performed at many events including store launches for Oroton and Lexus, events for Masterchef and Channel 10, the Australian Olympic Committee, multiple events for AFL clubs and has sung the National Anthem for the NBL, WNBL and State Parliament. As a musician, he has worked regularly with Anthony Callea, Tim Campbell, Normie Rowe and can be seen at multiple piano bars around Melbourne. Theres also been a few reality show appearances along the way 🙂

As a TV presenter and actor he has had roles on Upper Middle Bogan, Never Tear us Apart, Neighbours and worked on numerous productions with NAB, Chemist Warehouse, Chrysler and Crown Casino to name a few.

Garth Ploog was born in Moonee Ponds, Victoria, Australia on the 16th of December 1985. He grew up and went to school in Sunbury where he still lives today. He has 3 older brothers, one of whom passed away in 1997 when Garth was 11.

Garth begun playing piano at 7 years of age. His parents sent him to lessons after they heard him play ‘The Entertainer’ by ear. It was also in grade two later that year that he first sang in public at his local school concert; a rendition of ‘Danny Boy’ in front of about 100 people. The line “Danny Boy I love you so” lead to typical childhood teasing from his older brothers, but also lead to Garth giving up singing until he was 15.

Garth continued to take piano lessons all through his teens from local teacher and friend Marlana McCarthy and began learning Drums at highschool from Joe O’Keane. From there he began playing in all of the school bands as a drummer and started his first band Broken Alliance (originally named Vexation) as the drummer and backup singer. Their main influence was Metallica and The Offspring and through this band Garth was able discover his ability in songwriting, and learned to play guitar. The first complete song he ever wrote was named ‘My Life’s End’ a tribute to his late brother, Cain Dossett, when he was 15.

In year 9, when Garth was 14, he auditioned and got a lead role in his high school music Dames at Sea.He then performed each year for the next 3 years in school productions of How to Succeed (Bud Frump), Oklahoma! (Curly) and Copacabana (Steve/Tony); the last of which, in his senior year, Garth played piano live on stage. By that time, 2003, he was also the lead singer/rhythm guitarist of his rockband and had recently joined a Melbourne performing arts studio Centrestage, where he studied musical theatre, acting, singing and jazz dancing under Ian and Leanne White with the goal of studying musical theatre after highschool.

Garth graduated from Sunbury College in 2003 with an ENTER of 96.20. His subjects included Physics, Specialist Maths, Maths Methods, English, Further Maths and Music Performance(singing). He achieved dux of the school in English and Music, and due to his love of sport also earned the “Caltex Best All-rounder” award. However he didn’t apply for any universities, instead opting for musical theatre school auditions.

After being encouraged by WAAPA to improve his dancing, and deferring from BAPA, Garth decided to take a year off to concentrate hard on his musical theatre skills. Still learning at Centrestage he performed with the Mt Players at Macedon in a production of Annie (Rooster) where he received great reviews. Shortly after, as a last minute decision, Garth auditioned for Australian Idol 2004.

Garth was 18 years old and inexperienced, however took the attitude of making the most of it into his auditions, with no expecations. He was lucky enough to make it all the way through to the Top 30 and then the Wildcard Show, showing off a big personality and a knack for taking criticism in his stride. Shortly after he had a small part in an episode of Neighbours (Jimmy Black).

After coming home from the Idol experience, Garth volunteered at a Melbourne based charity calledYouth Vibes (previously called Here for Life), an organisation dedicated to the prevention of Youth Suicide. In that role, Garth spoke to hundreds of teenagers Australia-wide about his life experiences, goal-setting and coping with frustration. A highlight of which was speaking to the Austin school, a school for longterm teenage in-patients at Austin Hospital, where he returned many times. He was also the ambassador for the No Dole Program, an initiative aimed at encouraging study and work after highschool. Due to financial issues Youth Vibes closed in 2008.

Thoughout out his entire singing life Garth battled vocal problems and finally, in 2005 he was diagnosed with a large cyst on his vocal chords that had most probably been there since he was very young. He was forced to have it surgically removed, which lead him to go into rehabilitation for nearly two years with John Lander at Voice Alive, which literally saved his voice. Through this time Garth began studying Jazz piano and continued his songwriting. He also joined his first function band Level 6 where he played keyboard for 2 years and with that band supported Normie Rowe, Jimmy Barnes and Dean Vegas.

Though his work with Youth Vibes he met Jo Hogan, the director of that charity, but also the director of a management company called Vintrix. He signed with their company in 2005, which lead to 4 years of planning and preparation for an original album. Garth began performing his original songs in public in early 2007. With a band of local gun musicians, he quickly created a small following which culminated in a showcase at Ormond Hall and Manchester Lane. After which Garth spent 3 months in New York recording an album which was produced by Larry Dvoskin and Vintrix. That album is currently unreleased. Garth and Vintrix separated in early 2010.

Since 2008 Garth has been performing regularly around Melbourne. Most notibly, he was a regular for 4 years with Grand Wazoo; a 14pc soul band that has been performing consistently for 30 years and honed his jazz singing with the John Montesante Quintet. Garth has also performed at hundreds of weddings and private functions, and is a proud member of corporate bands Full Circle and The White Tree.

In 2016 Garth went on tour with Anthony Callea as part of his “Backbone” album tour which reached number 1 on the ARIA charts. He also works extensively with Tim Campbell and is a regular corporate entertainer in Melbourne and throughout Australia.